A wise man* once said, "Instead of writing a post about how you've been too busy to update your blog, just delete your f'ing blog."  Ouch, but so very true as I sit here trying to think of what to say after a 3 month hiatus!  Is anyone actually reading these words?  Does anyone still care?  Well, if you've stuck around this long (and thanks to those of you who inquired whether I went on vacation and decided never to come back), here's an action packed update on my life since my last post:  Visited Indonesia. Bought a new house. Lived in an empty house in San Diego. Moved to DC/Virginia.  Flew the world's best dog across the country. Unpacked.  Spent good chunk o' money on knick knacks, new water heater and vanity for new house.  Finally started cooking again. 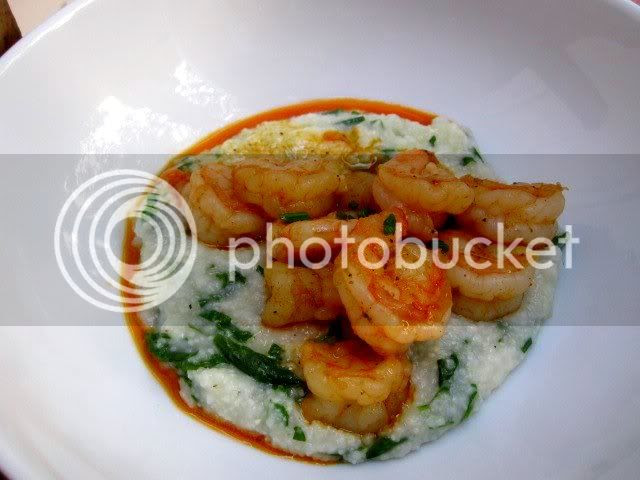 Clearly the list goes on (and on and on), but I figure that's more than enough personal mumbo jumbo.  On to the good stuff!

Since moving I've attempted to embrace local cuisine - some of which I've never even seen before.  Grits may be a quintessential southern food that I fully admit that I've never even seen before, save a Paula Deen episode.  I spotted this recipe in the latest issue of Food and Wine and figured it'd be worth a shot.  If it's sinful enough for Paula, it's gotta be good, right?

Well, I'd say half of this household is still undecided about grits.  The shrimp, sauce and grits tasted amazing but the texture may be odd to those who are sensitive to well, mushy stuff.  Me?  I love it.  I'm sold.  California girl goes southern?  We'll see about that as I still miss sushi and fish tacos.  But, I'm gettin' there.  Be sure to use a flavorful, smoky paprika to add good flavor.  Otherwise, I thought the recipe was spot on.

Well, I can only hope that it will not be too long until I write again.  After a long hiatus from not only the blog, but from cooking as well I think I'm back in the swing of things. The new kitchen has taken some getting used to (more on that later...) but I think things are on the right track and am looking to purchase some extra storage - post to follow about the progress!

Smoky Shrimp and Grits
Recipe adapted from  Food and Wine

2. In a medium saucepan, bring 3 cups of water to a boil. Gradually add the grits and a generous pinch of salt. Cover and cook over low heat, stirring occasionally, until the grits are thick and porridge-like, about 7 minutes. Season with salt and black pepper and stir in the cheddar cheese, baby spinach and chives; stir until the cheese is melted and the spinach is wilted. Cover the grits and keep warm.

3. Spoon the grits into bowls, top with the shrimp and sauce; serve.