First things first. Thank you SO much for all the sweet anniversary wishes. We had a wonderful weekend, spent relaxing by the pool & spa at a nearby resort. I feel refreshed and like a newlywed all over again. Here's a picture of one of the last slices of the Triple Layer Anniversary Carrot Cake, still holding up well after a week. Perhaps we should save it for our 2 year anniversary? 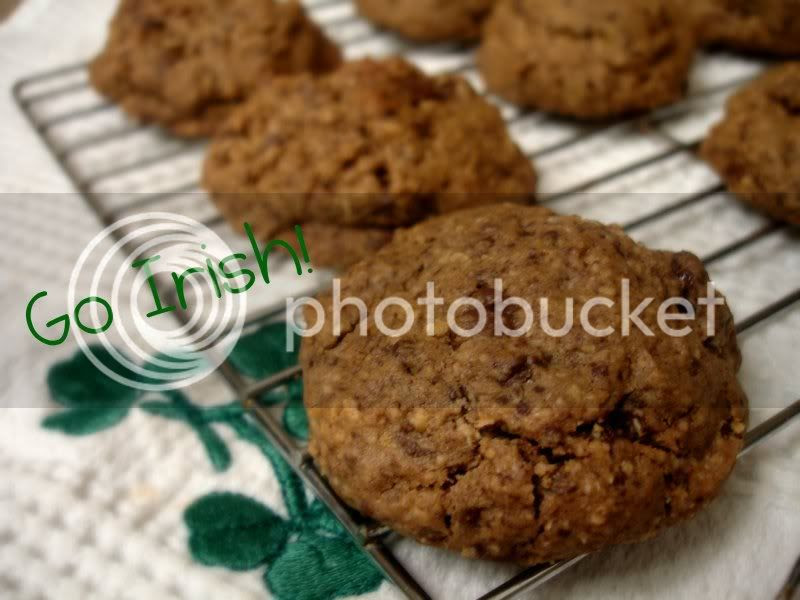 What do Espresso Chocolate Chip Cookies have to do with the Irish?

Well, not much really except that I made these delicious cookies to bring to a Notre Dame tailgating party.

Though cookies may not be your typical tailgating food, after a day of eating hot dogs, chips and drinking beer all day, I always crave sweets to round out an otherwise absurdly unhealthy day. Cathy over at Noble Pig created this recipe and considers these "grown up cookies," so I figured why not unleash them on some football-crazed adults?

Though I had originally been excited to say that I didn't modify anything in the original recipe, I did make a few changes (though some were by mistake). Instead of using nuts, I put my free sample of TCHO Nutty chocolate to use and along with some semisweet chocolate chunks, ground it up with oatmeal for the base of the cookie. Espresso powder adds a sophisticated taste to the cookies while even more chocolate chips are then added for good measure. 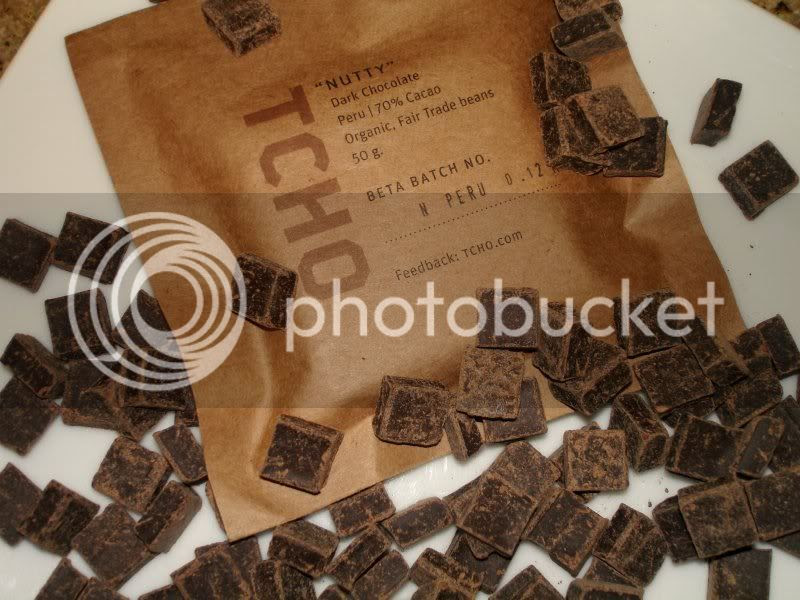 I pretty much followed the rest of the recipe to a tee, but somewhere along the way I accidentally forgot 1 cup of white sugar and only used 1 cup of brown. Whoops! They were still delicious and I told everyone at the tailgate that they were low carb cookies ;) 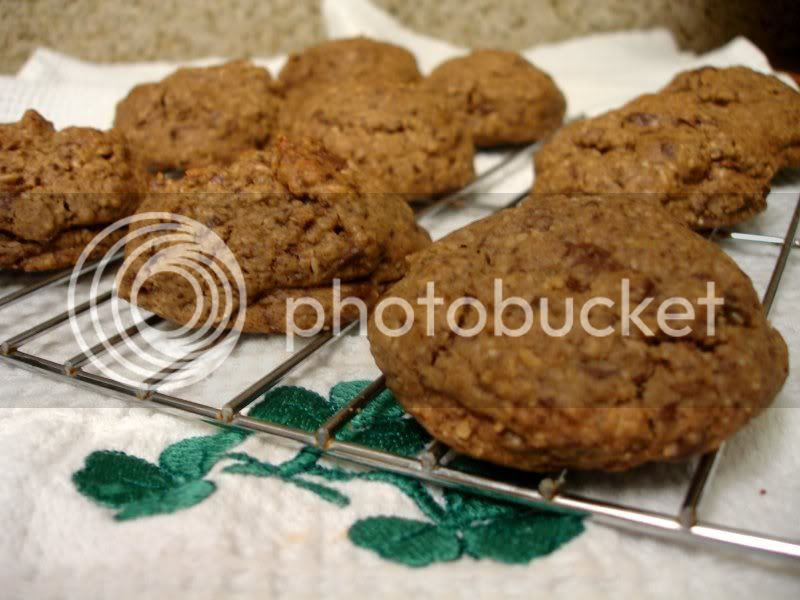 You can find the original recipe here. Just don't forget the 2 cups of sugar and consider using TCHO's amazingly delicious chocolate as an added flavor bonus!

Aggie's hosting a Foodie Event in honor of football to see what else is cooking on game day. Head on over to her blog and show her what you have cookin' by September 15th.

I remember seeing those cookies at Cathy's! They must be great and it's good to know they still work with 1 cup sugar less, lol! I'm glad to hear you and hubby had a nice time celebrating!

Great treat for the tailgating party!!

Hilarious, forgetting the sugar, wow if they were still sweet then wow that's sweet! Glad you liked them!

What beautiful looking cookies Sharon! Gorgeous pics too! Have a good one!

Lol I think these cookies definitely beat the average tailgating treats! So tasty, who could resist!

Sooooo I'm guessing you're in a pretty good mood this week ;-)

I bookmarked that recipe too--glad to hear you liked it.

But I am devastated to learn you are a ND fan. I don't know if I can continue to read your blog. ;)

I hope the cookied are better than ND is! :-)

Those look phenomenal! I've got to get my act together before the 15th for the football event.

clearly, the only thing better than a cookie is a cookie that can provide a caffeine kick. great treats, sharon.

What a fun football treat! We are HUGE football fans so we will have to make these for game time! YUM!

This is sort of like my dream Sharon (the cookies) love chocolate and espresso. Please do not save the cake, time for a new tradition for you two.

I love the pictures! It's almost as good as www.thechocolateseason.com, a chocolates and such business by a girl I went to high school with. You should check it out - I think you'd love it! I love going there just to drool :D

Oh dearie. I need that cookie now for a pick me up! It looks fantastic and bet it taste even better dipped into a mug of mocha!

happy belated anniversary! Those cookies look great! at least you didnt use salt instead of sugar (like I once did) haha.

What delicious looking cookies! I love this recipe and can't wait to try it! I would be very popular if I made these for game day! Thanks for sending over the recipe!

Cookies are my bff's. I want to make these now!