I like to think of myself as trend-aware. Though I'm not necessarily swayed by the latest trends, I at least know of their existence. Remember when those onesie leotard shirts were in style? Yea, I was there. 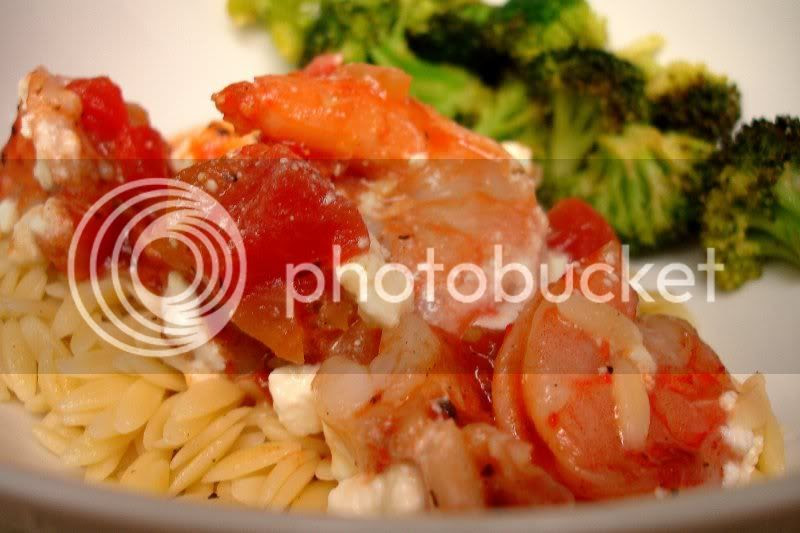 Well, I must say that I've been absolutely blindsided by the Twilight Series phenomenon. I thought Twilight was a brand new release until I realized there are four other books in the series. Whoops. Wanting to participate in water cooler chatter, I finally bit the dust and started reading the first. I can't say I'm overly impressed or understand the hype quite yet, but it's still early in the book.

Meanwhile, another trend that I am a strong believer in has graced the kitchen yet again. There's something about the combination of feta and shrimp that just does it for me. Sort of like how women everywhere are swooning over Edward Cullen. Yea, just like that.

Paired with lemony broccoli and lemon orzo, I find myself absurdly content: the house smells wonderful, the food in front of me tantalizing, and I am eating shrimp. It doesn't get much better. Some people like sexy vampires, I like shrimp 'n feta. 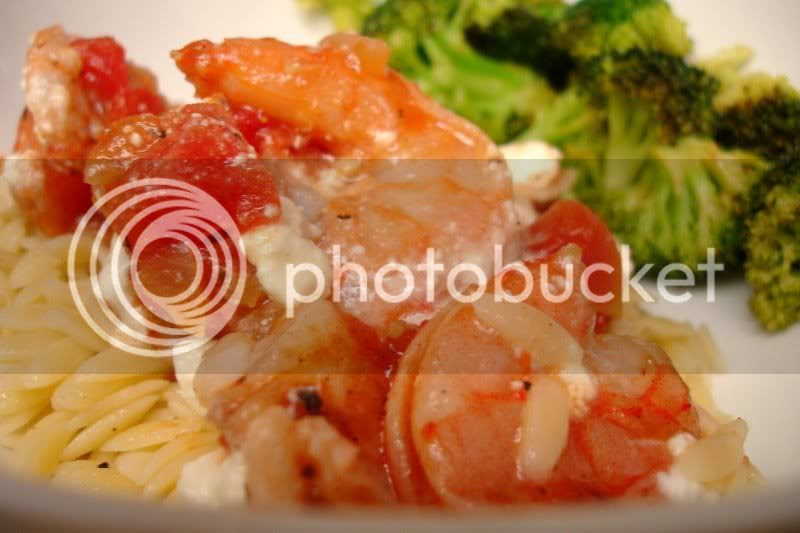 Cinnamon and allspice add a nice spice to the dish and provide an alternative to the many shrimp and feta recipes floating around the internet and my own blog.

I decided to pair the shrimp with a side of steamed broccoli, tossed in lemon juice and garlic. Already having lemons out, I also tossed the orzo in a mixture of olive oil, lemon and pepper. Since the sauce from the shrimp is very flavorful, the lemony taste serves only as an accent and doesn't overpower the meal. 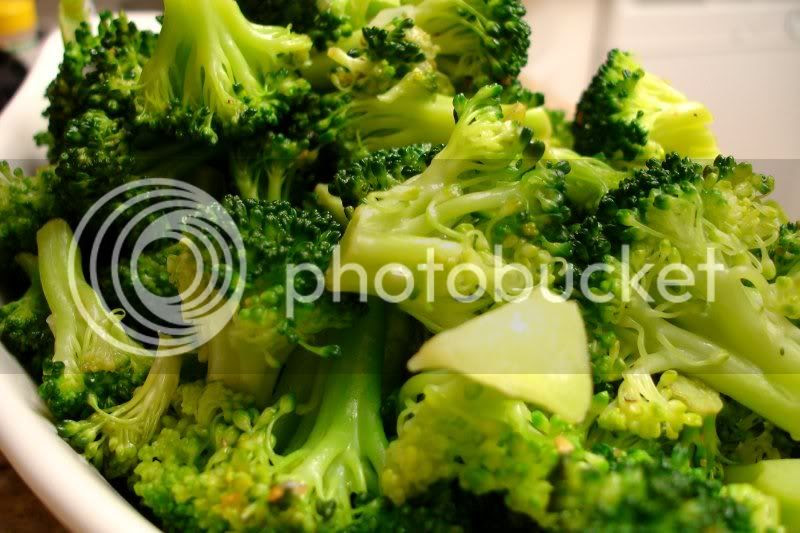 Good luck with all your Thanksgiving preparations! I spent my usually lazy Sunday ironing linens and vacuuming. I hope the remainder of my prep work is a little more stimulating :)

This is my entry into Ruth's Presto Pasta Nights hosted by Daphne this week.

Preheat oven to 375°F with rack in middle.

Cook onion and garlic in oil with 1/4 teaspoon salt in a saucepan over medium heat until softened, about 5 minutes. Stir in spices and cook, stirring, 30 seconds. Add chopped tomatoes with juice and sugar and simmer, uncovered, stirring occasionally, until slightly thickened, about 20 minutes. Remove from heat.

Season shrimp with Old Bay, dash of salt & pepper, then stir into tomato sauce. Transfer to a 2-quart shallow baking dish and top with feta. Bake until just cooked through, 15 to 18 minutes. Serve sprinkled with dill.

Bring a large saucepan of salted water to a boil. Add orzo and lemon peel. Cook until orzo is al dente, according to package instructions. Drain and return to pot.

Add lemon juice, oil, and scallions to orzo. Toss and season with salt and pepper; Serve with shrimp.
Posted by Sharon at 8:30 AM

Everything about this dish is amazing! I still haven't gotten into Twilight, but it took me YEARS to catch up on the Harry Potter mania so I expect I will be the same with Twilight.

wow what nice dishes you prepared. very colourful too

Oh, I love me some shrimp n'feta. Good luck with your Thanksgiving preparations. I am spending my Monday polishing wine glasses and silverware, while the table cloth is being washed. I actually enjoy all the prep. :) Makes me feel "grown up."

I've tried really hard to be nice, but I'm soooo sick of Twilight.

That meal certainly sounds good. I too have not gotten into the whole Twilight thing

What a fantastic meal. Both of my girls are into the Twilight series and were front and center for the premier.

What a vibrant color, I am sure that taste delicious.

My kind of meal, complete, colorful and delicious!

Now this is a trend that just might stick with me for good! This dish looks amazing!! Happy Thanksgiving to you!!

i stubbornly refuse to hop aboard the twilight train. i'm also still resisting harry potter. :) something i can't resist is the fabulousness of greek spices. nice concoction. :)

Thanks for sharing
zesty

This looks so good! I love feta so so so so much and the fiance loves shrimp so it's quite possibly a match made in heaven!

This is my kind of meal. I love feta with anything - it's my favorite cheese.

I never got the appeal of Twilight. Halfway through the book I got so annoyed that several friends told me to quit reading. I knew I'd have to finish the book, but I was strongly advised given my hostile feelings not to read the rest of the series.

I need to get on the feta & shrimp bandwagon too. Peter is always making something with feta and I love that.
Yes, this does look really tasty.

oh yum!! What a great looking dish. anything with shrimps!!

AS it has pasta in it...perhaps you would like to consider it entering it in this week's Presto Pasta Nights that I'm hosting? =)

Sharon this looks wonderful,I hope you have a great Thanksgiving!

This sounds absolutely delicious. . . Broccoli is my favoite vegetable and your shrimp and orzo sounds delicious...healthy too!

Yum, I've got a pack of orzo in the pantry I'll have to use for your recipe. Looks great!

Shrimp with anything has me drooling. This version is particularly mouth-watering. Thanks for sharing with Presto Pasta Night.

I like the pairing of shrimp and feta as well.

I like vampires. I am watching Trueblood now and it's okay. I grew up with Barnabus Collins and all the Dracula movies. I even like the updated ones; Blade, Underworld, etc. But this Twighlight phenomenon....i dunno.

Yes, what is it about shrimp and feta? I think your blood is a little bit Greek! This is such a meal my mother (Greek) would love, especially the way you prepared the broccoli. This looks like a delicious and healthy meal.

What a nice complete meal :)

I've never had feta with shrimp! I really like how it seems like a summery dish but you warmed it up with cinnamon :). I am being tempted more and more each day to read the Twilight books! I told myself I wouldn't see the movie until I've read the book because the books are always better :P!

Have a great Thanksgiving! :)

Baked shrimp with a tomato and feat sauce work surprisingly well together!

I still haven't caught on to this whole Twilight thing. I think I'm just old for my age. Then again, I hadn't heard of shrimp and feta until just now, so maybe I'm just out of it. Definitely sounds like an interesting taste, though.

Forget the sexy vamps, I'll take your shrimp and feta.

That looks delicious. I am going to have to try that recipe. As far as Twilight goes - I became a fan before I'd even heard that it had such a huge following. I read the first 3 books in 4 doors. I have finished the complete series now (even the unfinished novel) and wish that there was more.

This is a wonderful version of Shrimp Giouvetsi and I'd certainly chow down on this!

Yummmmmmmmy. Just found ya and I heart your blog!