For those of you who applauded my food journal efforts, thank you. It was a valiant effort, but my inner beast took a hold of me and forced me to eat faster than I could write. It happens. Maybe I'll put it on 2010's list of resolutions. 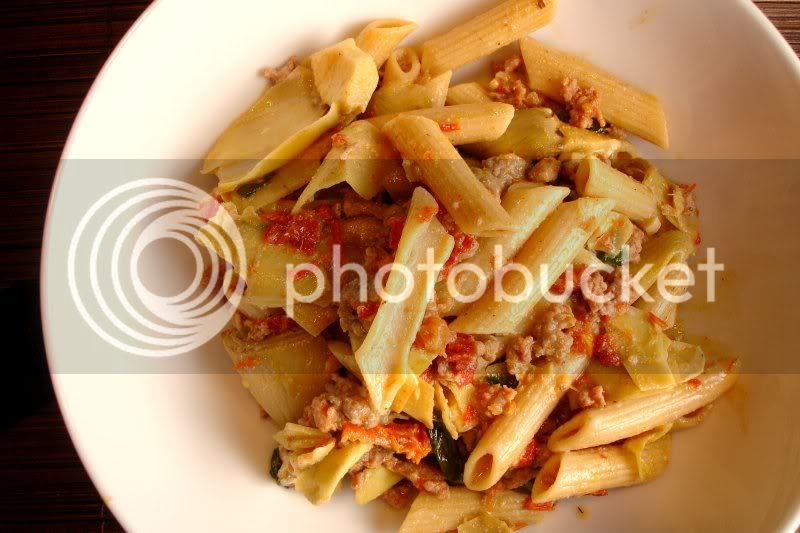 I may eat a lot, but I can at least attempt to cook & eat healthy. This penne pasta recipe was inspired by a dish I saw in Giada's Family Dinners. I made quite a few tweaks, including adding additional veggies, using whole wheat pasta and subbing turkey sausage for the meat. In order to add a little creaminess without adding a lot of fat, I added a few dollops of part-skim ricotta cheese to thicken up the sauce. After buying a tub of ricotta on sale, I've found that it works wonders and have happily been throwing it in to just about every dish I make, whether it belongs or not! 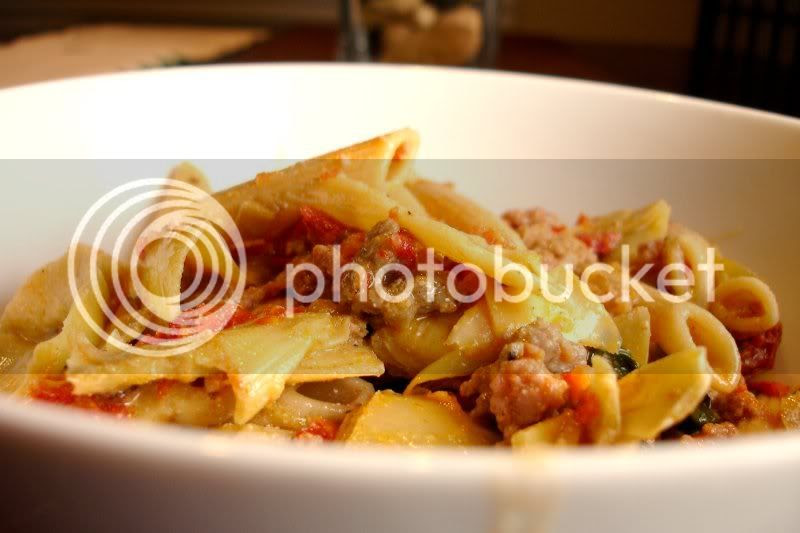 The pasta is a hearty, easy to throw together meal that filled us up. We happily had the dish for leftovers the next night. Instead of microwaving, which tends to dry out pasta in my opinion, I threw the leftover pasta into a wok with some olive oil, broccoli, a few more scoops of ricotta cheese and finally green peas. We liked this version the best so I've included it in the recipe below. 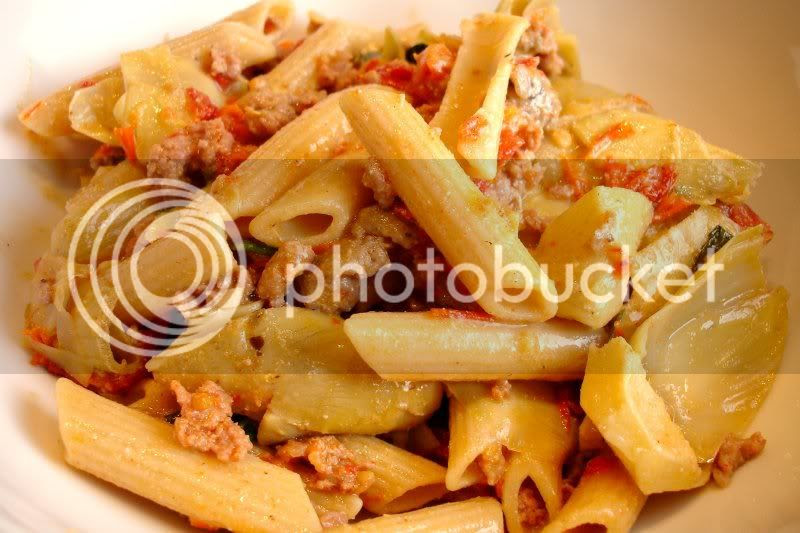 Rustic Penne with Sun Dried Tomatoes, Artichokes & Sausage (and too many other goodies for a recipe title...)
Inspired by Giada's Family Dinners

1. Heat 2 tbsp of sun dried tomato oil in a large skillet. Add the sausage and break up into pieces. Cook until brown, about 6-8 minutes. Transfer the sausage to a bowl.

2. Add artichokes & garlic to the same skillet and cook until garlic is tender, about 2 minutes. Add the broth, wine, and sun dried tomatoes. Bring to a boil and allow to simmer until the sauce reduces slightly, about 8 minutes. Add peas & red pepper flakes.

3. While sauce is simmering, bring a large pot of salted water to a boil. Add the penne and cook until al dente, about 8-10 minutes. Drain the pasta, do not rinse.

4. Add pasta, sausage, 1/2 cup of cheese, parsley, spinach, and broccoli (if using) to the mixture. Toss until combined. Add two scoops of Ricotta cheese and continue to toss until cheese is melted and incorporated in sauce. Season with salt and freshly ground pepper, to taste.
Posted by Sharon at 9:06 PM

Look so good! Should be very tasty with the sausage!

this sounds fantastic, right up my alley!

That does sounds wonderful

What a comforting dish! This one has it all!

What a tasty looking pasta dish. Love the artichokes!

Looks fab. I love the flavour combinations - sun dried tomatoes add such a depth of flavour.

It looks like a baked dish - but comes together so much more quickly.

If Giada can eat it - it should be fine, right? I love the changes you made with the leftovers. It's always nice to switch it up a little if eating 2 days in a row.

I'll have to buy some ricotta now! I like to throw in little bits of cheese to various dishes, but the ricotta would add such a tasty creaminess!

Yummm, rustic food is the best food in my opinion!

Oh wow this looks great Sharon!! i could definetly he more than my fare share of this!

i don't know if there is anything i love more than pasta. i often call myself "carb woman". this looks fabulous, sharon! and the ricotta idea is brilliant.

super delicous I m hungry now. I like the addition of ricotta so yummy

Kim in the Kitchen said...

Hi Sharon! I tried an old recipe of yours and gave you a shout out on my blog. Check it out! Thanks for the recipe too!

Hi Sharon
I love your dishes and your photos are really beautiful.
Have a great weekend x

I love rustic dishes like this! I told my husband the messier food is, the more I like it.

pasta with sausage and anything else is always good!

you know I still dream of those pastry bundles you recently made! I love artichokes, so I naturally would love this dish.

Ooooh, looks delicious! The thought of doing the food journal struck me a while ago, until I realized that I mostly eat the same things over and over again. Since I'm only cooking for one, my dishes usually last me a week =P

i would love this with turkey sausage since i don't eat pork. so everyday, this dish is. nice work.

Sound like the perfect pasta dish. I bet it was great, especially with the artichokes!

Nice healthy sub-ins. And yes ricotta thrown in everywhere is awesome isn't it?

That pasta sounds tasty. I like the use of the whole wheat pasta.

Sharon this looks amazing! Great job. I will have two servings please :)

This looks and sounds absolutely fantastic!!! All my favorite things!

Hey! I just stumbled across your blog today and I'm thinking YUMMY!!! I love Giada and have all her cookbooks. I think your addition of Ricotta is great! When I was younger (and less concerned about my weight) I would add a nice big dollop of ricotta on top of my pasta every Sunday!

I moved! Come visit me at www.aduckinherpond.com.

All the pictures are so good. I can try this pasta without the meat. We are going through a pasta phase.

I know what it's like to buy a tub of something and want to throw it into everything! For me it's fromage frais, which is a French cheese that has the consistency of yogurt but sort of plays the role of your ricotta scenario. I found the fat free stuff, and now I can't get enough of it!