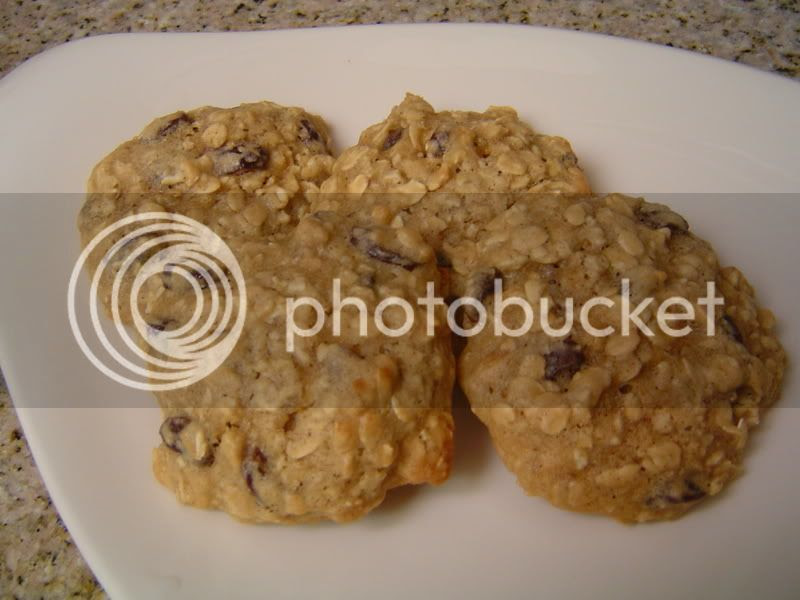 I have an oatmeal raisin cookie recipe that is my tried and true perfect recipe. The cookies come out perfectly every single time, and my hubby and I enjoy eating so many we feel sick. Unfortunately for you, I'm not posting it today since that would mean I'd have to make a batch and I can't afford to eat a dozen cookies today.m
I attempt to cook healthy and relatively low fat dishes on a daily basis but I have never really caught on to the low fat baking craze. There's something that just doesn't ever seem right with low fat cookies and cakes, though that doesn't mean I'd turn them down! But, because its a new year and we have also decided to run a half marathon in a few weeks, I tried to hunt down a yummy treat recipe that is a little healthier than the norm. I came across David Lebovitz's blog and found a recipe adaptation from Nick Malgieri's Perfect Light Desserts: Fabulous Cakes, Cookies, Pies and More Made with Real Butter, Sugar, Flour, and Eggs, All Under 300 Calories Per Generous Serving cookbook. (whew...how did his editor let him get away with that title?!) I liked David's take on the recipe, though I have only a few requirements for my oatmeal raisin cookies that I found missing: heavy on cinnamon and fat, plump raisins. So, I made additional tweaks by adding spices and soaking the raisins in eggs & vanilla. Since the raisins soak up some of the liquid, I didn't want the cookies to be dry so I added an egg white. Soaking the raisins may sound strange, but it works like a charm.
While making the cookies, I was surprised by the wetness of the dough as my 'typical' cookie dough is a little on the sticky side. Because of my nervousness, I added a few dashes of oats while the Kitchenaid was in action. 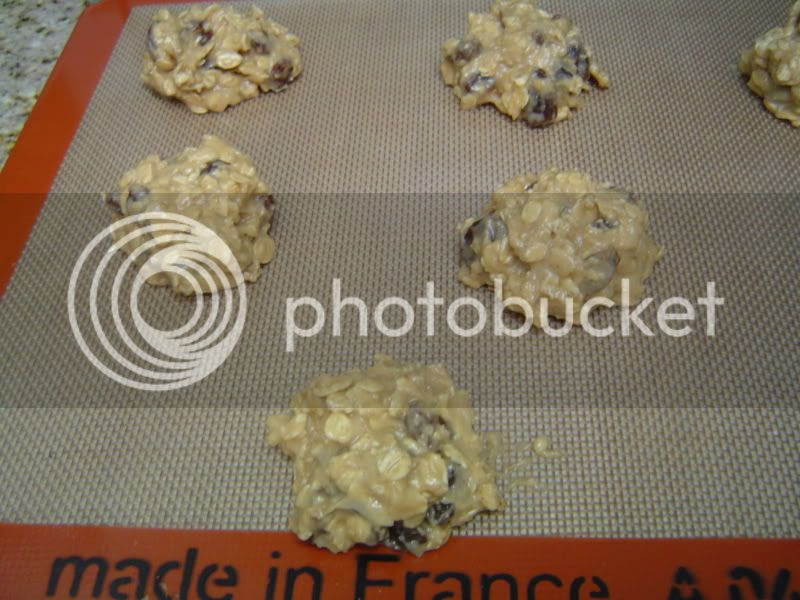 Verdict: I was suprised to find that the end result were plump beautiful looking cookies. So plump that they almost look like big fluffy breakfast cookies (more cake like in texture than you'd expect). These certainly don't taste as sinful as a normal cookie, but I suppose its because they're not really sinful at all. They are a fabulous compromise considering the very low butter and fat content, but I sure do miss the real thing sometimes. If it were my recipe, I'd rename them Oatmeal Raisin Breakfast Cakes. Come to think of it, next time I may try adding protein powder and re-purposing this recipe to a workout / protein cookie...now that's Marathon Style! Try these out and let me know what you think!
Edit: Hubby came home & wasn't as pleased with these as me. He liked them, but said they're like muffin tops (which isn't necessarily a bad thing)! Looks like I'll be posting my old tried and true recipe in a few days :)
Sharon's adaptation of David's adaptation of Nick Malgieri's cookies
1 large egg, beaten
1/2 cup raisins
1 teaspoon vanilla extract
1 teaspoon baking powder
1/2 teaspoon baking soda
1/2 teaspoon salt
1 1/2 teaspoon ground cinnamon
2 tablespoons unsalted butter, at room temperature
1/2 cup granulated sugar
1/2 cup (packed) light brown sugar
1 egg white
1/4 cup unsweetened applesauce
1 1/3 cups rolled oats (don't use instant or quick oats)
baking sheet lined with parchment paper or silicone mat
Preheat the oven to 375 degrees and set the rack on the lower and upper thirds of the oven.
1. In a small bowl, beat egg and vanilla. Soak the raisins in the egg mixture for approximately an hour.
2. In another small bowl, whisk together the flour, baking powder, baking soda, cinnamon and salt.
3. In a large mixing bowl, beat the butter and granulated sugar until smooth. Mix in the brown sugar, then the egg white and applesauce
4. Stir in the dry ingredients, then gradually add the egg and raisin mixture. Once it is incorporated, add the oats.
5. Drop the batter by rounded tablespoons on the baking sheets and use a fork to gently flatten the dough.
6. Bake the cookies for approximately 13-15 minutes, or until they "look dull on the surface but are moist and soft", according the Nick. Rotate baking sheets during baking for even heating. (I made my cookies very big, so cook for less time if you are using a teaspoon or cookie dough scoop).
Storage: Once cool, store the cookies in an airtight container at room temperature.
Posted by Sharon at 12:24 PM