How beautiful is this?! 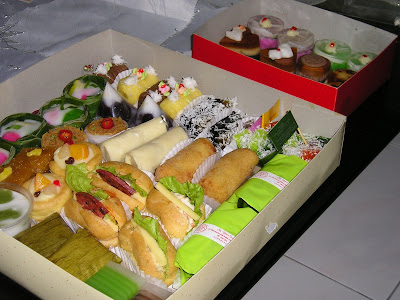 I'm out of town for the week, so I haven't been able to post any recipes that I've made but I thought this would be an appropriate post with the upcoming Chinese New Year's on 2/7 - a celebration of family, new beginnings, and best of all- food.

In my family, serving food (in copious amounts!) has always been a sign of love, caring...and a good host. This has been so ingrained into my thinking that I cannot stand to have someone in my house that does not have a full belly! The photo above was taken during a family visit in Indonesia. Because we were visitors, it was only natural that we would be greeted with food gifts by all those stopping by to say hello. Needless to say, in those few weeks, I sampled more exotic desserts than my stomach could handle. Small desserts such as those in the photo are called "kue." Wikipedia provides more insight on these delightful treats:

the most common flavouring ingredients are coconut cream, grated coconut, pandan leaves and gula melaka or palm sugar.
While those make the flavor of kue, their base and texture are built on a group of starches – rice flour, glutinous rice flour, glutinous rice and tapioca. Two other common ingredients are tapioca flour and green bean (mung bean) flour (sometimes called "green pea flour" in certain recipes). They play a most important part in giving kue their distinctive soft, almost pudding-like, yet firm texture.

There are not too many Indonesian bakeries in the United States, although you can find Thai or Malaysian groceries often carry variations of kue. If you are adventurous, here's a picture of one of my favorite desserts that you can sometimes find in Asian grocery stores that carry fresh foods. Kue Lapis ("layered cake") is traditionally a steamed cake consisting of alternating layers - each layer is steamed separately for about 10 minutes! The green coloring usually comes from a pandan paste (or food coloring). While it's translated as 'cake' kue lapis tastes nothing like what you'd associate cake textures with. Rather, its somehow a cross between jello, pudding and tapioca balls :) As a child, I'd eat these strip by strip! 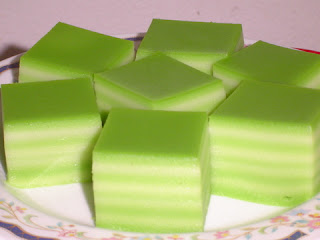