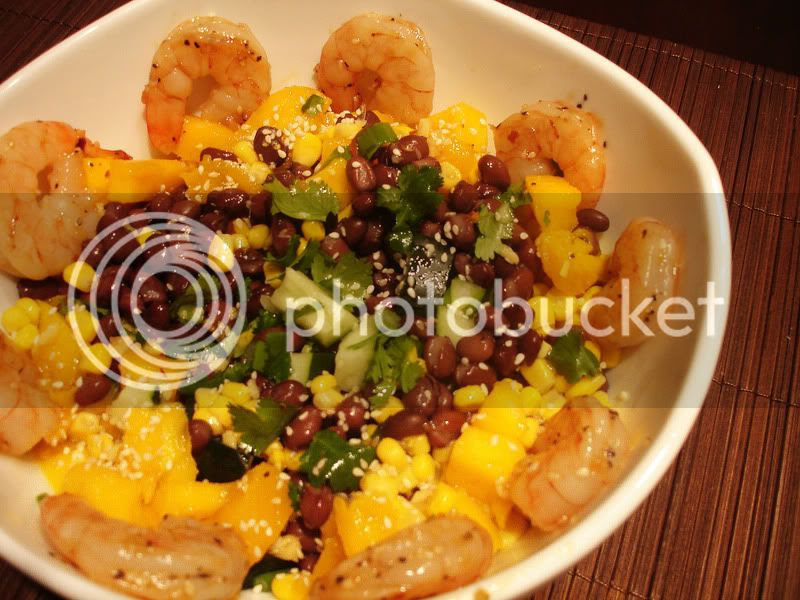 Many great things in life have been created by mistake or unintentionally. Take the potato chip, for example. Legend has it that potato chip inventor, George Crum, was a chef at the Moon Lake Lodge in Saratoga Springs, New York. One diner complained that Crum's French fries were too thick for his liking and sent the fries back. Out of spite, Crum decided to irritate the guest by producing fries too thin and crisp to skewer with a fork. The plan backfired as the guest loved them and other diners began requesting Crum's potato chips.

Where am I going with this? Well, if you can only imagine, I recently botched a recipe as a result of a 'cut and paste error.' You see, I usually bring my laptop into the kitchen with me, but after one too many spills, errant crumbs, and sticky fingers, I've decided to start jotting recipes down or printing them out, lest I lose my laptop to grease splatter. After realizing that I used the salad dressing ingredients for the shrimp marinade, I figured it was too late and continued on anyway. Like many great inventors, I found my creation to be a delight anyway. BTW, this is tongue and cheek- I obviously don't consider myself to be the great George Crum's protege :)

The following recipe for Mango Black Bean Salad with Sesame Shrimp is a perfect dish for the summertime. It's light and refreshing, with a sweet and spicy zing added by lime, sugar and red pepper flakes. I added a little corn for extra color, and extra cilantro because I love it so much. Hubby suggested trying the dish with avocados next time, so if you have some on hand, give it a whirl.

Oh, and if you make this dish, you'll of course notice the ingredients for the shrimp marinade are the same as the dressing ingredients...therein lies my mistake :) Though the end result was tasty shrimp, it may be just as easy to simply season and marinade the shrimp with some olive oil, garlic & salt and pepper.

4. In a nonstick skillet, heat 2 teaspoons olive oil over medium heat. Saute shrimp until cooked thoroughly, turning once, about 2-3 minutes. Top the salad with the sauteed shrimp, sprinkle with sesame seeds and enjoy.
Posted by Sharon at 6:54 AM

I like to cook, but girl, you can COOK!! I always love reading about your latest recipes. Looks yummy :).

I think it looks great!

Sometimes the best screw ups are the best finds and you learn that you didn't really need all that stuff anyway!

Hey, I’m sure you’ve been wondering why I have disappeared from Jeena’s Kitchen forum. Well the truth is, that forum is a total JOKE. Jeena promises to send you members gifts when you reach a certain number of posts, but it’s a LIE. Once I reached that number of posts, she DEACTIVATED my account and I received nothing in the mail. I tried to make another account but she won’t let me. I’ve repeatedly emailed her to get answers and she ignored my emails. The best thing to do is to stop going on that forum and make sure that others are not tricked by her lies.
I asked a friend to make a post about this nonsense and Jeena deleted her post from the forum.

(P.S Regarding when to add the lemongrass - my mistake for missing that in the write up. It should be btw step 2 and 3. After the shrimps(dished out) and before adding in the other veg. Add the lemongrass stalk (intentionally bruised bottom)after step 2, and when fragrant after lightly frying in oil, add in the beans, veg, etc)

Indeed! Some of the best dishes are created from error. You can take a recipe, make a mistake, and voila! new recipe.

Lisa - thanks! It's a good thing we workout otherwise we'd be in big trouble with all this cooking.

Kirk, Donald & Noble Pig - thanks for stopping by. I like recipes like this because they really are foolproof!

Mimi - sorry to hear. I haven't been on there in quite some time. Something was always a little fishy...

tigerfish - thanks for the pointer. I 'winged' it and it turned out well. I'll post about it soon.

That looks nice and fresh and light and Summery and good.

hmmm. i'll forgo the shrimp cuz i don't do shellfish, but the salad itself looks and sounds so good!

This looks fantastic! Looks like it turned out to be a "happy" mistake:-)

Ah, I love good mistakes. Your salad looks fabulous! I especially loved your reference to Viagra... the compound intended to treat high blood pressure, but had an unexpected side effect. Hehe.

looks like another must try shrimp recipe of yours! thanks for inspiring me to cook!