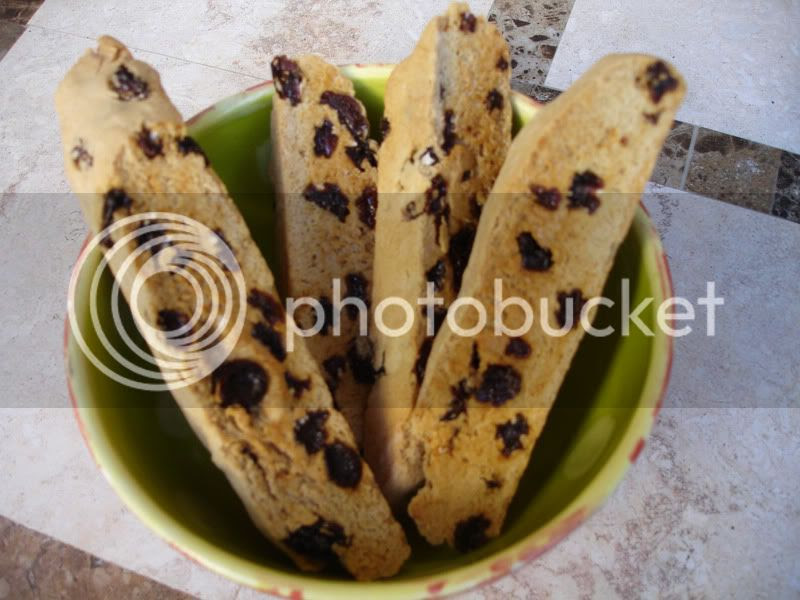 Biscotti has always been a favorite of mine, but I've never understood the logistics of making it. How do they end up looking so perfect, crisp and with nice, slanted edges? My first attempt with baking biscotti was an utter disaster. Instead of the elegant biscotti I had hoped for, I ended up with a lumpy and doughy mess---none of the tooth-breaking crunch that I love. I avoided making these again for months, allowing my biscotti cravings to be satisfied by the #1 money extortioner, Starbucks. Well, I'm not sure what inspired me, but I decided to take a second go and have found that with a good recipe, making biscotti isn't all that challenging!

By design, the making of biscotti is not a quick process. The word 'biscotto' roughly translates to "twice baked." The biscotti dough is first shaped into a rectangular log and baked until golden in color and cracking on top. Meanwhile, the scent of cinnamon fills your house! The log is then removed from the oven to cool and the oven temperature decreased to prepare for the second baking. The biscotti are cut into the familiar diagonal slabs and re-baked at a low temperature to allow them to dry out, providing for the crispiness that we all love. I chose a cinnamon raisin recipe from a fabulous cookbook, One Smart Cookie, since I've never actually had this type of biscotti before. More traditional flavorings include anise, chocolate chips or almond cranberry. And because I was tentative of a repeat of past failures, I halved the recipe which resulted in 6 biscotti and a few ends for the chef (me).

For those of you that know me, you know my second passion behind cooking (oh, and my hubby) is gardening. Here's a glimpse of my new spring flowers! (I ate my biscotti on the patio with a cup of coffee, and it was glorious). Our garden has exploded this year as we now have our entire very long patio ledge covered with flowers. We've planted basil from seeds that just sprouted and also a lemon tree.

Oh, and I will have to say that my 3rd passion of late has not been photography. For some reason, I have recently been unable to take a photo for the life of me! 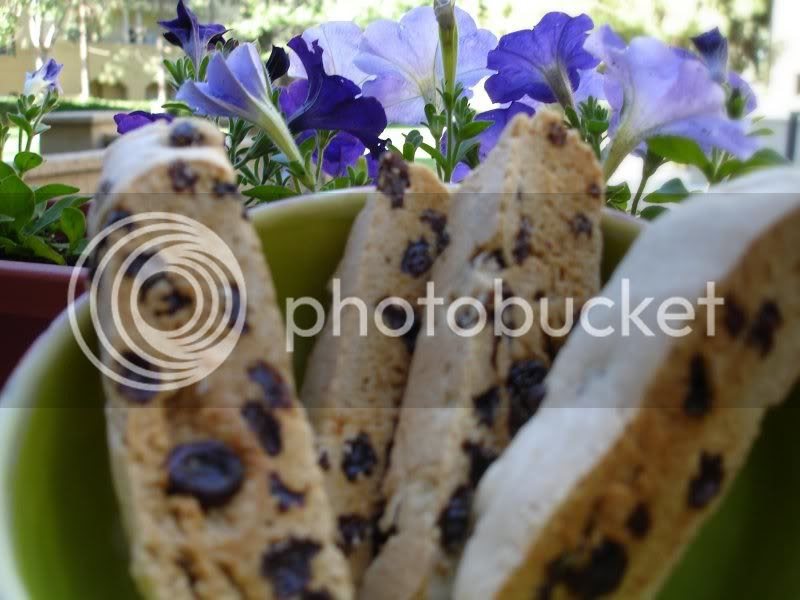 1. In a large bowl, beat softened butter and sugar until creamy. Add in egg and vanilla until smooth.
2. In a medium bowl, sift together flour, baking powder, salt and cinnamon. Gradually add the flour mixture, along with the raisins to the egg mixture. Stir just until combined. The dough will be dry, so you may need to use your hands to combine as the dough comes together.
3. Turn the dough onto a floured surface. Shape the dough into an 8" long log. Place on a cookie sheet sprayed with nonstick spray, and flatten the log to a rectangle about 3" wide.
4. Bake for 20-25 minutes, until firm and starting to crack on top. Transfer the log to a wire rack to cool for about 15 minutes. Reduce oven temperature to 275 degrees.
5. Once cool, place the log on a cutting board and using a serrated knife, cut each log diagonally into 1/2" - 3/4" slices. Place the slices cut side down on the cookie sheet.
6. Return to the oven for 15 minutes, then flip the cookies over and bake an additional 15 minutes.
7. (Optional): If you like your biscotti very crispy/hard, turn the oven temperature off and allow the biscotti to cool in the oven. (Thanks to my friends at the Cooking Light Board for this tip!)
Posted by Sharon at 9:23 AM

I will be making these Sunday. Well, maybe not this Sunday, I am having the worst gout attack of my life right now so walking is a spectator sport for me. :-)

I just bought a book on making bread. I want to get my hands dirty in that arena. As you know, pasta making has gotten my attention as of late.

What kind of camera are you using?

Mroprph, first of all I'd like to see some afro pics. :) Hope you're also feeling better. Let me know how the biscotti / bread baking goes!
I'm just using my husband's Sony point 'n click right now. I"m working on upgrading!

Oh yum...these are so simple but perfect looking. I know what you mean about picture taking. It's so hard to ootograph food!

Because of you and your blog I went out and bought Small Batch Baking for my sister in law who is moving in with her boyfriend this summer...just the two of them.

I hope she enjoys it as much as you do!

Ha Ha! I totally got a laugh from the Starbucks comment. Their price seems to go up daily around here!
You have inspired me to make biscotti once again.

These were fabulous! I will be doubling the recipe and making more next time. Thanks!