Sorry I've been a little MIA lately. After returning from a fabulous & fun girls' weekend in Vegas and starting a new job this week, I'm a little worn out. Amidst planning a Thanksgiving feast, I hope to spend the weekend relaxing and procrastinating and most enjoyably, catching up on all the goodies on my Google Reader!

As I mentioned in a previous post, we have a virtual apple orchard growing on our countertops. A few weeks ago, hubby and I decided to escape from this very un-Fall-like warm weather and visit Julian, a mountain town about an hour from San Diego. Hubby had never been apple picking (gasp!) so I dragged him out there to visit Raven Hill Orchards. Remembering the huge apples of my apple-picking youth, we were dismayed to find that the apples were tiny. TEEENY TINY. I suppose that's what you get for visiting at the end of apple picking season. We plucked away regardless, but now I'm stuck with a bushel of very sweet yet small apples. Aren't they cute? (they look 10x as large in this picture than reality) 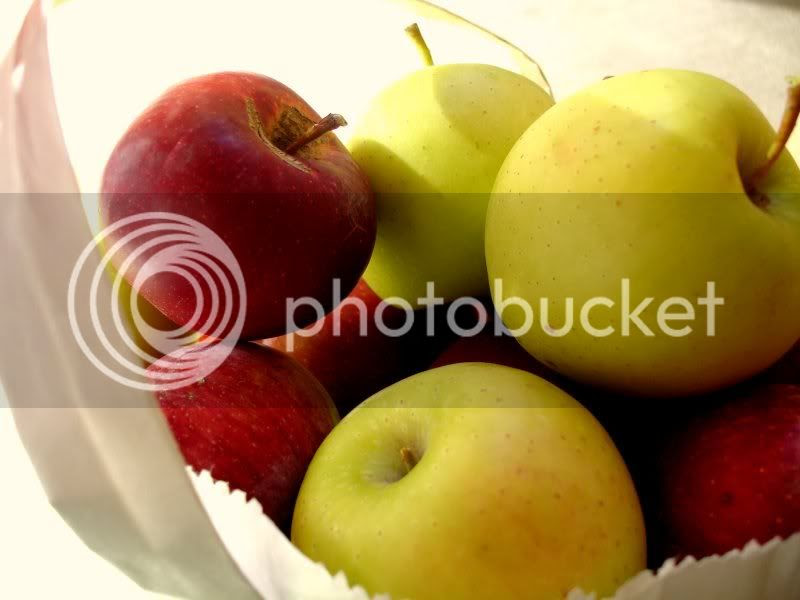 Not knowing what to do with such small apples, I decided to make apple butter. Here are my baby-sized apples simmering in apple cider...YUM: 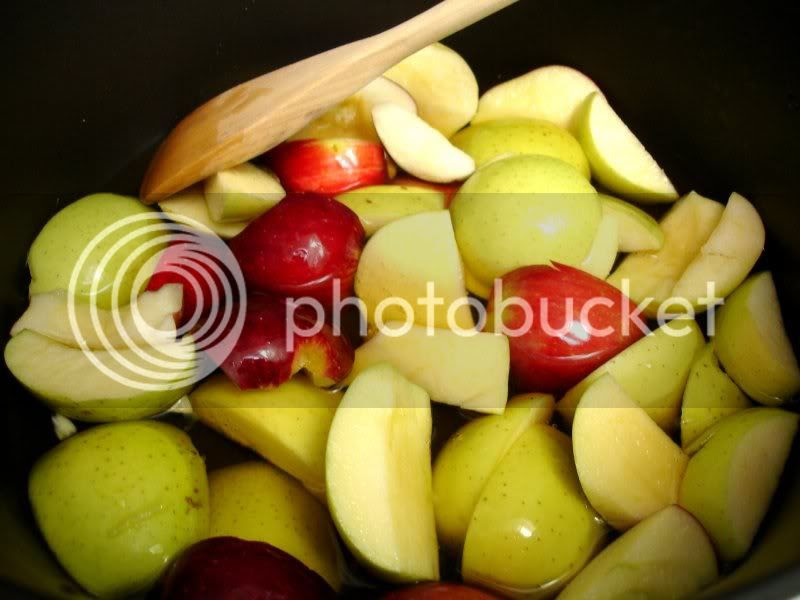 Because most of the recipes I found called for a certain amount of normal sized apples, I used this recipe as a guide, using apple cider instead of apple juice and adding spices by sight.

The resulting apple butter is sweet, spicy and an all around treat. I will most likely be making this again soon as we still have a ton of apples to make and making your own apple butter is much easier than I had anticipated. The apples are merely sliced, not peeled, shaving a nice chunk of time from the prep & cooking time. 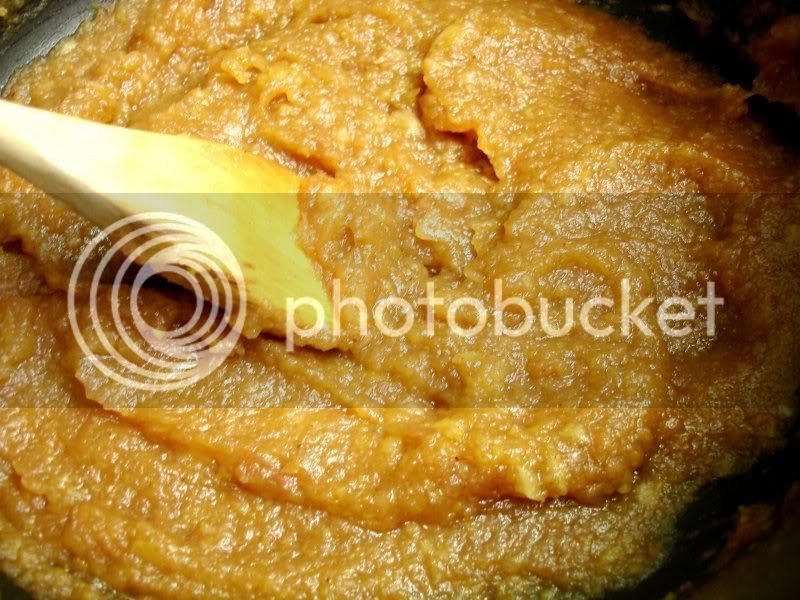 Serve this atop some fresh biscuits or on a turkey sandwich and you'll be in heaven!

If you're interested in canning your apple butter, try using this complete kit from Ball.

Approximately 10 crisp apples (I used a mix of Jonagold, Empire. Fuji and Red Delicious) - Don't peel apples as this adds to the flavor.
1 cup of brown sugar
1/2 cup of apple cider
1/4 tsp each of cinnamon, cloves, allspice and cardamom
1 tsp vanilla extract

Place all ingredients into a large saucepan and cook over medium heat until apples break down and become very soft.

Using an immersion blender or a normal blender, puree the apples. Return to pot and continue to simmer until apple butter is thick.
Posted by Sharon at 7:28 PM

Any recipe where you can skip peeling the apples is my kind of recipe! Looks delicious.

yummy looks delicious :) they re cute the small apples ha

I love that you don't have to peel them, that's half the battle!

Your apple butter looks great and not having to peel the apples is a winner too!

I have never made apple butter..looks simple and tasty!

Its great you can use the peels in that! We spent so much time peeling when we made apple sauce

I LOVE apple butter and that looks delicious!

Thanksgiving at your house must be amazing! Hey, are you going to talk about any of the food you had in Vegas? I'd love to hear your perspective on it.

oh yum, LOVE your blog! I just found it and am so glad I did!

Love this! I totally missed apple picking season. I have something for you on my blog!

Yum! I've never made my own apple butter but may have to try it out!

Hope the new job is going well and I'm so envious you got to have a girls' weekend in Vegas! Fun. :)

I had the same weird realization when we went apple picking this year. They're so much smaller than I remembered!

:) I never went apple picking when I lived in CA either, I didn't even know they had orchards there :P! That's the city girl in me, I guess :D. Apple butter is definitely one of my favorite toppings, and I could definitely eat this straight out of the pot! It has such a delicious texture! Hope you enjoy your new job!

oooooh...beautiful to begin with, and beautiful at the finish. i do believe i prefer my apples in butter form. :)

You know, I love apple butter, but I have never thought of making it. The "no-peel" idea is an excelent one.

I'll have to give this a try. It sounds wonderful.

I love homemade apple butter! It is great on just about everything!

Mary - we ate at Koi, one of my favorite sushi joints and Spago Cafe. Both were delicious! If we had more $$, we would have loved to try some of the more swanky places.

You're so brave! I wouldn't have made homemade apple butter!

How funny Sharon. I used to live in SD and have been to Julian many time. Yep, those apples are usually always tiny...Great recipe!

The look good regardless of how big they are. My sister makes apple butter every year but i've yet to try it, it sounds wonderful!

All the goodness of apples without the actual butter--yum! Thanks for the idea of what to do what the ton of apples (using some to make apple tarte tartin) I had gotten from the Little Italy Mercato today!

I've never made homemade apple butter before. It looks and sounds great!

I bet the small apples are packed with flavor.

Mmm. I've never had apple butter but keep hearing so much about it. Maybe I'll have to give this a try some time since it looks so great!

u went to vegas, again! girl u might as move there! lol! nice pics of the apple. i wish i could find an orchard near by.

Yumm! I love apple butter. This would be so yummy for Thanksgiving breakfast with some biscuits.

Love apple butter, I have never made it homemade before, yours looks great.

Hee hee! They're like toy apples! :) You could also try weighing the apples to come close to the recipe: one medium apple is 180g, or 6.5oz :)

Mmm, this looks and sounds so delicious!!

So glad you had a great time! We loved our apple picking Julian adventure (it was my first time too!) Apple butter is a good choice.

I've never picked apples in Julian before, only in Los Olivos. But now I must put Julian next on my apple picking list! I've been there many times for their apple pie though....yummy!

LOVE all your beautiful apples pictures! Wow, I am totally inspired to try this apple butter now. We always make pies with our pickings, but I get bored with that sometimes. Thanks for the reicpe....

And Happy Thanksgiving!!! I haven't been here in a while and I miss you! It's nice to be back...

Apple butter is good! I just tried making some pumpkin butter and it was really good as well.