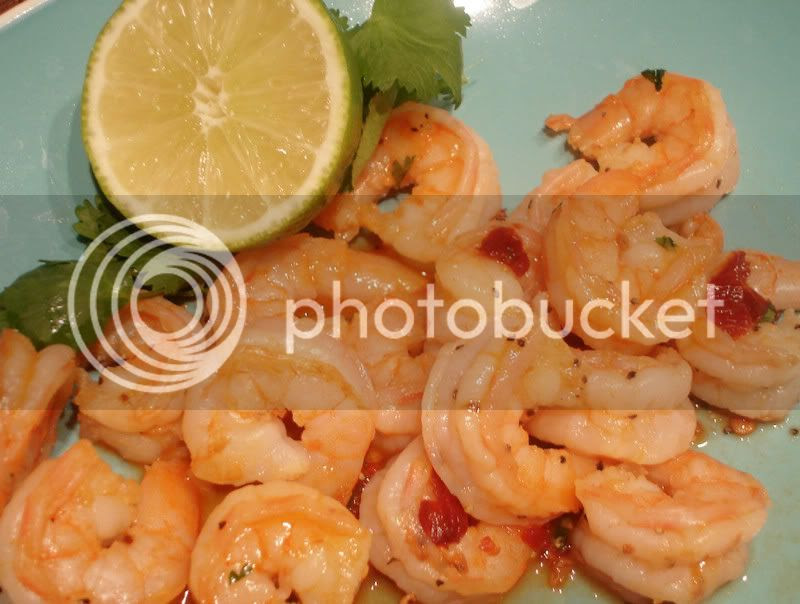 By nature, my mother is a worrier. To this day, she still worries that I may forget to thank someone when they've done something nice for me, she frets that I forget to lock my doors, and even worries when I leave hubby to go out of town (lest he get lonely & have to cook for himself!). She's a very caring woman, and now that I'm well past my rebellious teenage years, I have a much greater appreciation for her worries.

Among her many worries is my love of shrimp. If you read the blog regularly, you may have noticed that I have a teensy obsession with both shrimp and desserts. Per my worrisome mother, I'm in for a lot of cholesterol problems with my shrimp addiction. I've always taken her concerns to heart, but to be honest have never really looked into the validity myself.
While its true these small yet tasty crustaceans have high cholesterol, they manage to pack a mighty nutritional punch. In a recent study, researchers at Rockefeller University and Harvard tested several different types of low fat diets on 18 people with normal cholesterol levels, including a diet containing more than half a pound of steamed shrimp a day. "The scientists found the shrimp diet did not raise participants' overall cholesterol levels. They're not sure why, however, the scientists say perhaps it's because shrimp is low in fat and contains fish oils that are good for your heart."

Moreover, just a four ounce serving of shrimp, provides as much as 28.2% of the recommended daily value for vitamin B12 and and around 20 grams of protein. As mentioned, shrimp are full of the "good fats," providing the much sought after omega 3 fatty acids in a low mercury form.
Ahh, now with the guilt out of the way and a rather clear conscience, I bring you Chipotle Lime Glazed Shrimp. Though I've seen them in countless recipes, I've never cooked with chipotle peppers in adobo sauce. The adobo adds a nice, smoky flavor while the peppers add quite a kick so be cautious if you're a spicy foods wimp like me. Brown sugar is used to counteract the heat and helps create the 'glaze' that coats the shrimp. I served these plump and juicy shrimp with Coconut Cilantro Rice.
*Source: World's Healthiest Foods

1. Create the glaze by combining lime juice, cilantro, chile, adobo sauce and brown sugar in a small bowl. Set aside.

2. In a large skillet, heat olive oil over high heat. Toss the shrimp with the salt, pepper, and sugar. Once skillet is preheated add half the shrimp to the pan in a single layer and cook until the edges are pink, about 1 minute. Remove the pan from the heat and using tongs, flip the shrimp and let stand until the shrimp is opaque, about 45 seconds. Transfer the shrimp to a large plate. Repeat with remaining shrimp.

3. After the second batch has turned opaque, add the first batch of shrimp along with the Chipotle glaze to the pan. Toss until combined and shrimp are fully cooked through.
Posted by Sharon at 8:28 PM

I love your shrimp obsession! You are my go-to-shrimp-recipe girl :) This recipe looks and sounds delicious.

Ha! It looks like you and I were on the same shrimp wavelength, even down to the bubba gump reference! That is too funny. I love chipotle, so I will have to make more shrimp! oh darn ;)

Oh your MOM sounds like a real sweetie! I too obsess over shrimp, it's just so easy to work with!

This looks like the perfect recipe to feed the addiction.

it's a travesty that ol' bubba failed to mention chipotle lime glazed shrimp in his list. a travesty. :)
also, just as i think you and i would be good friends, i think your mom and mine would get along famously!

I love shrimp, too, but Nate is allergic so I've decreased my consumption a lot. But I think as long as you are downing the little guys three times a day you will be fine. Great recipe!

This is an excellent dish. I have the non-botox lips to say it proper though; shrimp samwich, shrimp gumbo, barbecue shrimp...etc. :-)

Your shrimp looks lovely Sharon! I love shrimp as well, and as an RD, I don't worry about cholesterol because the overall sat. fat content is so low, that they could never raise your cholesterol. Enjoy!

I love shrimp also. Always have a bag in my freezer. This looks delicious!

I just learned that shrimp were high in cholesterol from Top Chef. I don't think that matters, though. They're worth it!
These look great.

Those shrimp look really good! I recently made some orange and chipotle shrimp that I really enjoyed.

This sounds great- I made a chipotle lime shrimp once that was very good but I don't think it had the sweet element in it (brown sugar.)

DUDETTE, you're killing me here! Forget Bubba, you're a lot cuter and I love your shrimp presentation a whole lot better! This looks fantastically fresh and delicious.

Oh nice!! So yummy looking, its making me drool...

I love shrimp! This looks so good--I'm bookmarking this one to try this summer.

Hi Sharon. Thank you for stopping by my blog. I came to check out yours. You have a great blog - lots of yummy yums!:) I juts subscribed to you to read more.

BTW, this shrimp looks so delicious! I love shrimp and always look for interesting way to cook it. Thank you!