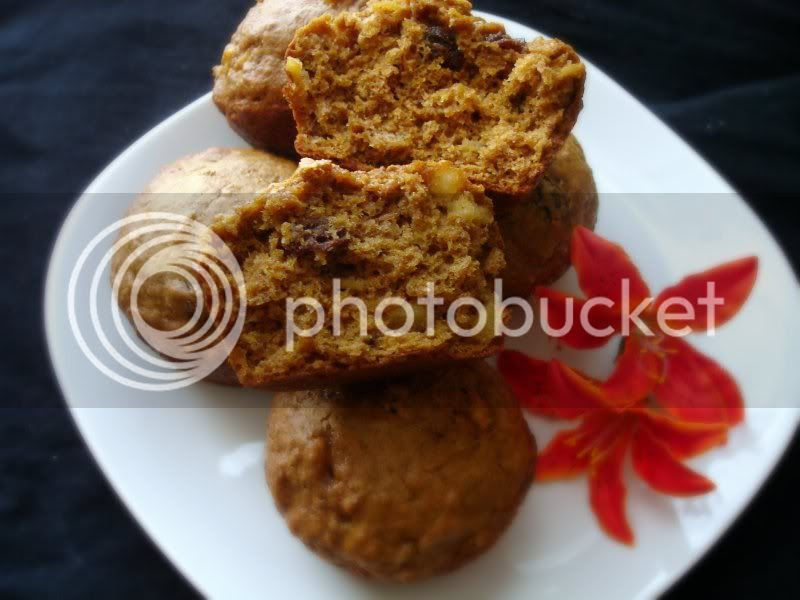 DC is wonderful, but I'm starting to miss the luxuries of home: my trusty red Kitchenaid mixer, a toaster oven, my Calphalon pans, oh and of course, my bed. Nothing's better than your own bed, dont ya think? Because the college kid has no other baking tools beyond a muffin pan, I have been well, baking a lot of muffins to satisfy my need for baking. When I get back home, I've already compiled a list of quick breads, yeast rolls and cornbread that I'm dying to make.

Today's muffins come as a courtesy of our cereal addiction. When cereal is on sale, I cannot pass it up and as a result, we have more cereal boxes than living space in the studio right now. How two people can devour 5 boxes of cereal is really beyond me. In an attempt to clear out the pantry, I went after my least favorite cereal,Raisin Bran and tried to repurpose it as muffins. 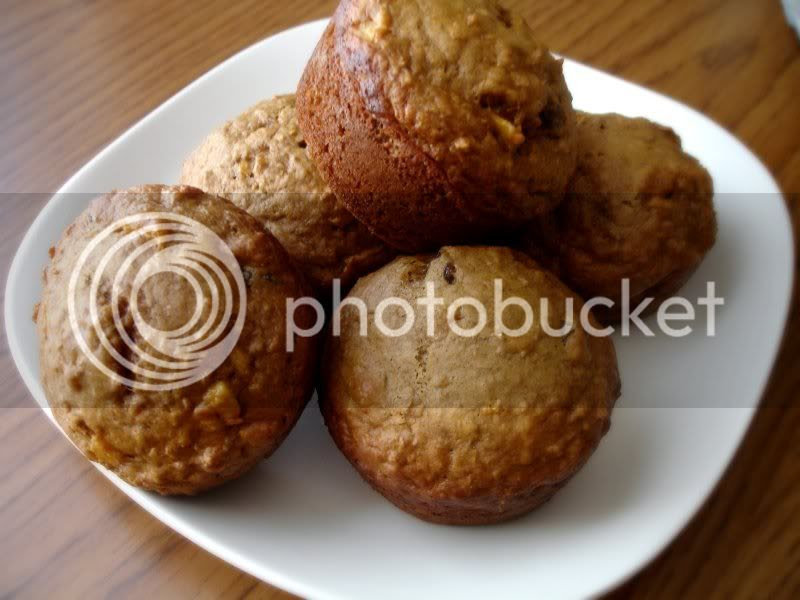 Raisin Bran cereal is soaked in a milk mixture along with molasses, brown sugar, oil and an egg. To boost the 'excitement' factor of sometimes blah bran muffins, I added cinnamon, chopped apples and extra raisins to the batter.

These were delightful straight out of the oven - warm & fluffy. A day later, the muffins were still good but a little bit on the dry side - nothing a quick 5 second nuke in the microwave didn't fix. Is this just the nature of bran muffins? I seem to have run into this day-old dry-bran muffins dillema many a time - they're never quite the same the 2nd day around.

Readers, please help! I need to get rid of this box of Raisin Bran. Do you have any tried & true Raisin Bran or bran muffin recipes to share? Something that doesn't dry out the next day? If so, please share!

In the meantime, here's my recipe. I'd suggest gobbling these guys up on the day you make them. Making half of a recipe always helps as well.

1. Preheat oven to 375 degrees. Grease or line 12 muffin cups with muffin cups liners. In a medium bowl, whisk milk, egg, brown sugar, vanilla, molasses and oil in a bowl until combined. Stir in cereal, raisins and apple. Allow to stand for 10 minutes.

2. Stir cereal mixture again to break up cereal. Combine flour, baking powder, baking soda, cinnamon and pinch of salt in a large bowl. Make a well in the center and add cereal mixture. Stir until just combined and divide batter among muffin cups. Bake 20 minutes or until toothpick comes out of center clean.

these look good! no raisin bran ideas from me though, i don't think i've ever even had raisin bran before. :) may try this muffin recipe though!

In a mixing bowl, cream shortening and sugars. Add eggs, honey and vanilla; mix well. Combine flour, baking soda and salt; add to creamed mixture. Stir in cereal. Fold in raisins and walnuts. Drop by teaspoonfuls onto greased baking sheets. Bake at 350 degrees F for 12-14 minutes or until done.

"Nothing's better than your own bed, dont ya think?" I couldn't agree more!! As much as I love traveling, I always look forward to coming home and sleeping in my own, comfy bed :0)

For the raisin bran, I don't have any muffin recipes for it; but how about throwing some into a rice krispie bars recipe or even a banana bread recipe? Could be fun :0)

By the end of your time in DC you're gonna be muffin pro! I some times use cereals to make cookies, just make your favourite chocolate chip cookie dough (without the chips) and dump the cereals crushed with your hands. You can also try to process it and use it as cheesecake crust... Anyway I still think your muffins are great!

Oh man, Raisin Bran is one of my favorite cereals. I don't think I could sacrifice it for muffins!

I love your muffins! I get the same way after being away from home! Good luck with all of your muffin creations!!

On a positive note, you'll appreciate all your goods when you get back. Hand mixing is a $#$#%!! A++ on the effort and definitely good looking (and visually good tasting) muffins. XOXO

I think I could go on a muffin diet...these look delicious.

I was just having a conversation about excess raisin bran and found your blog via cooking light. I'm making these this weekend.

Those muffins sound delish!!! I think I will be trying them.

Breakfast on the go~sounds yummy! Sorry about only having muffin pans :(, that sucks...but I can see you're becoming quite the muffin expert, very creative recipe :D.

I like the sound of using cereal in muffins.

As much as I like going away, I am a big homebody as well. I bet these tasted great with the molasses and apple. Yummy!

for your perusal.
and you're so right--nothing's better than your own bed. just think how much you'll appreciate it and all your goodies when you return. what a reunion 'twill be. :)

i have a similar issue with making these... i have to keep them in the fridge and add bananas to keep em moist!

No recipes-just gratitude since I've had a half of a box sitting on my shelf since World War II. Thanks for the guilt free recipe!

Those look awesome, and I love Raisin Bran! I don't have any tried and true recipes for it, but I'll bet you could use it in banana bread. There's a really good banana bread recipe from one of the big cereal companies. Let me see if I can find it...

And the one I've tried--I'm sure you could use raisin bran instead. I think, hehe:

carmen - never had raisin bran? Well, its not my favorite - it's the hubby that buys it but then gets tempted by all of my cereals!

thejohn - thanks so much! Sadly, no mixer here but I'll save this for when I'm back home.

veggiegirl - I'm liking the rice krispies idea. Now I just have to go buy another box of cereal! :)

clumbsycookie - I knew I could count on you for some inventive ideas!

kristal - wanna come over for a breakfast buffet of cereals?!

cakewardrobe - I suppose I have gotten spoiled by my Kitchenaid. I've been using a mini-whisk...no fun!

noble pig - I'm right there with you.

g & cecilia -thanks for stopping by! I actually tried out another recipe that i think I like better. I'll post sometime today.

kevin - its a great way to use up cereal!

grace - reat post! The healthy version sounds intriguing but I'm sure I'll get pulled into the classic!~

loveofoats - great idea about the fridge. I'll try that one next time.

elle - thanks!! That recipe sounds fantastic.