Since the temperatures were once again above the 90s, we spent our weekend as tourists, hopping from one air conditioned museum to the next. As you may know, Washington, D.C. has an amazing collection of sprawling & ornate buildings, war and presidential monuments and a museums for just about any topic you could think of. Probably most famous is the collection of 19 museums of the Smithsonian Institution. 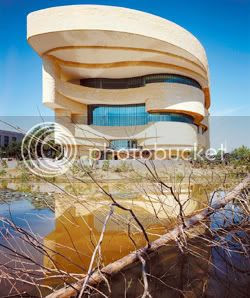 One of my favorite museums of the day was the National Museum of the American Indian, housed in an absolutely stunning building pictured above. Among the exhibits portraying the past & present life of Indians (Northern and Southern American) I of course, was particularly interested in the lifestyle, food and cooking artifacts.

Though certainly trendy at the moment, I learned that tiny quinoa once served as a staple food for the Ancient Incas, powering their armies and sustaining their communities as one of the three food staples (along with potato and corn). Historians believe the Incas worshiped quinoa as a sacred plant and deemed it "the mother grain." In today's world, quinoa provides a nutritional bouquet of vitamins, protein and contains all of the essential amino acids the human body needs. In fact, quinoa provides up to 16.2% of the daily recommended protein and more calcium than a glass of milk! Paired with black beans, you have yourself quite a protein combo. 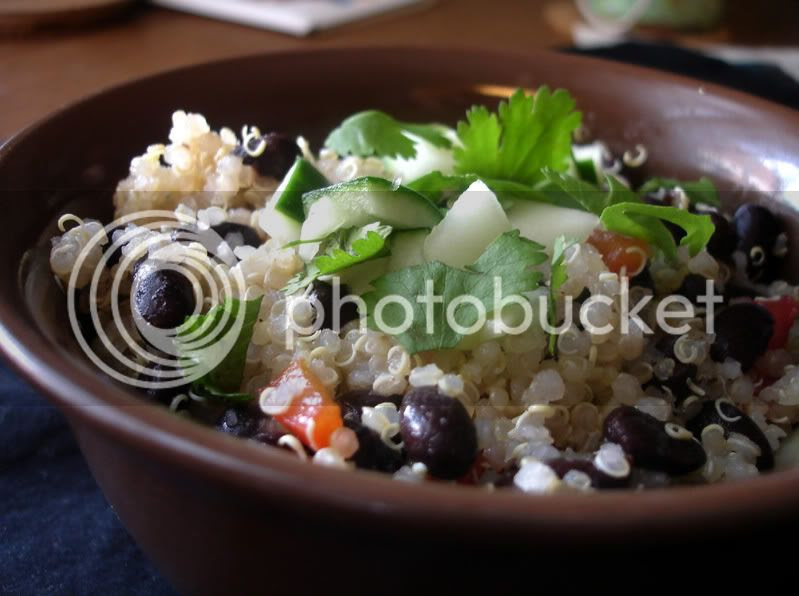 Inspired by our trip, I decided to make some quinoa and have a taste of this ancient grain (which technically is not a grain, but a seed). I know, I'm probably one of the last food bloggers to try quinoa, but now is better than never, right? Overwhelmed by the amount of recipes available, I followed a cooking technique outlined by Gourmet Magazine that calls for the quinoa grains to first be boiled, then steamed in a fine sieve. Note to all novices, um...if you have a plastic sieve, you might want to re-think this step before proceeding. Um, not that I did this or anything. 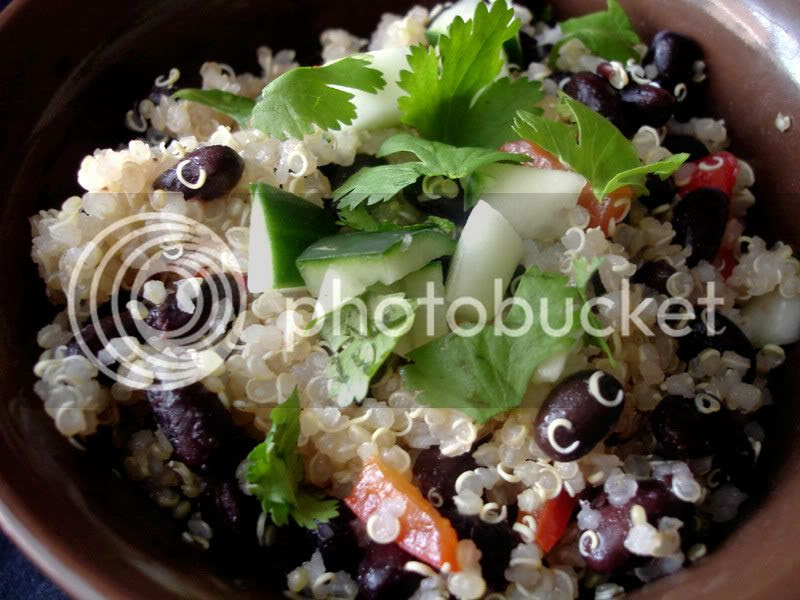 I added red peppers and cucumbers to the original recipe to make for a very colorful and hearty salad, perfect for the summertime. I also halved the amount of butter and oil to cut down on fat and still think this was delicious. Quinoa has a similarity to couscous and for its nutritional value & ease in cooking, I will definitely be making it again and again. Once I decide to like something, it'll be on our menu for quite awhile :)

For those of you who like to be in the know, quinoa is pronounced "KEEN-wah," not "Que-in-oahh" as some near and dear to my heart like to say.

Since this salad is a protein-rich, low fat 'superfood' I'm sending this recipe over to the Healthy Cooking event hosted by Fun and Food and also the One D (One Dish) Salads roundup hosted by Archana's Kitchen.

As a last note, if you do visit the National American Indian Museum or any of the museums in the Mall, take a pit stop at the Mitsitam Cafe where you can be treated to quinoa. The Cafe boasts native cuisine from the Northern Woodlands, South America, Meso America, the Great Plains, and the Northwest Coast and Columbia Plateau. The food is delicious and a unique treat!

1. Rinse quinoa in a fine sieve, rubbing grains and washing until water runs clear. Do not skip this step as unwashed quinoa is bitter.

2. Cook quinoa in a medium saucepan of salted boiling water, uncovered for 10 minutes. Drain quinoa in sieve. Place about 1-2 inches of water in sauce pan and heat until simmering. Place sieve over pot and cover with dish towel & lid. Steam for about 10 minutes. Remove pot from heat and remove lid. Let stand, covered with dish towel for about 5 minutes. Put pat of butter in pot and set aside to melt.

3. Whisk together lime zest, juice, olive oil & sugar. Add red peppers, black beans and tomato to warm pot. Drizzle with the lime mixture and toss gently. Add cilantro and drained quinoa. Fluff with a fork to combine. Cover with lid and allow to sit for 30 minutes.

What a great tourist weekend. Life sounds great and looks fun. I love the quinoa salad-I love grain salads plus anything with black beans.

What a fun weekend you had - I love touring exhibits and such!! And I also love quinoa (especially nowadays, since it's gluten-free, haha).

Ooooh, this looks great, Quinoa is just so in right now.

thanks sharon for a wonderful salad! Quinoa is so under-rated, we need such recipes to awaken the people to its goodness:)

Beautiful dish! Do not know if I will try it, I know my wife will love it! I would love to go to D.C. sometime. Enjoy while you are there!

"Note to all novices, um...if you have a plastic sieve, you might want to re-think this step before proceeding."

wow that is such an interesting tidbit about quinoa!

I almost always eat quinoa hot, so this recipe is a great intro for me to try quinoa in new ways. Lovely recipe!

i get such a kick out of hearing people try to pronouce quinoa. i try to laugh only on the inside, but sometimes it's just not possible. :)
this is a great recipe, mostly because black beans are involved. the health aspect is a nice bonus. :)

This is right up my alley right now. I made a quinoa salad recently, it'll be posted this week sometime. I used Rancho Gordo quinoa and it was good. I had never had it either. My wife had some pronunciation issues with it.

You're up there in my neck of the woods. We tried to visit ALL of the Smithsonian and could not do it in a week. I think I have been in 10! You should try to get up to B-More, Inner Harbor. Great blue crab and the Aquarium.

What a festive looking salad! I only tried quinoa for the first time, recently. I like it, but I'm not sure I love it. I think I need to try it again. I think maybe the first time I didn't rinse it enough. Look at how many times I wrote, I THINK! Egads.

Yum, this looks so healthy and fresh. Your weekend sounded so fun!

prudy - Life has been fun!

veggiegirl - I had meant to write that quinoa is gluten free. Thanks for reminding!

noble pig - I know, I can't believe I waited so long to try it.

the john - if your wife would love it, by all means you should make it!

loveofoats - I couldn't stop spouting off all these interesting tidbits as we ate dinner.

paula - I actually prefer this at room temperature. It's good cold, but the flavors don't come out as much.

grace - I had just been scolding hubby for his bad pronunciation when a man working at the Cafe in the museum pronounced it VERY wrong. He's cooking it! He should be able to say the word :)

mrorph - 10 is very impressive! We've only covered 3 :) Baltimore is always a good time. I've been a couple times for work and have loved the seafood. Looking forward to your quinoa creation.

Emiline - I THINK you should try again :)

carmencooks - thanks! It was a great weekend.

OMG I wanted to make this since I received July's issue! You make it look soo beautiful!!

i have to remind myself to to pronounce quinoa the right way. even while reading this post. is that strange?

It sounds like you are having a great time playing tourist and enjoying all the sights. Ready to come home yet? I love anything with black beans and this one looks delicious!

MMMMMM! This salad looks perfect. What a great sounding recipe and cool weekend too!

I always mean to cook with quinoa more than I do. Thanks for another dish to try.

You're tagged for a music meme!

Is it just me or was the quinoa left out of the recipe?

Anonymous- you're absolutely right. Quinoa salad sucks without the quinoa :) a cup is needed! Thanks

Girl all of the food on your site looks great. I am really digging this Quinoa salad! I am visiting by way of Bren's blog.

I have been enjoying quinoa salads lately and this one looks good!

High temp...and we get the high humidity here! YUcks!

I keep seeing quinou popping everywhere and shame on me I haven't tasted it! Your salad looks great and something I would like to eat! Keep enjoying your time in DC!

This looks so wonderful and healthy! Great job!

Quinoa is slowly creeping into being one of my favorite quick meal dishes. It can do so many things and take so many different flavors.

I really like the idea of adding the black beans and cucumber seeing that I always end up with more cucumbers than I have a clue what to do with.

so delicious and rich in protien can make a perfect ONE DISH SALAD MEAL. I would love to invite you to participate in my ONE DISH MEAL- SALAD event. This could be a perfect recipe, or if you have any other recipe that fits the rules, i would love to have you send it to my event. The rules for the event is in my site. Thank you