I'm Back with Bread Pudding!

After a fun and crazy week in our old stomping grounds, Chicago, I’m back and ready to catch up. The weekend was a fun one filled with sunshine, good times with friends and LOTS of food. We made a point to visit many of our old haunts and favorite food spots-- cheap, yummy Thai food being the #1 victim of our hunger. Oh, and how can you not love such a gorgeous city? For inquiring minds, the tall building in the middle is Trump's latest monstrosity which is coming together quite nicely. 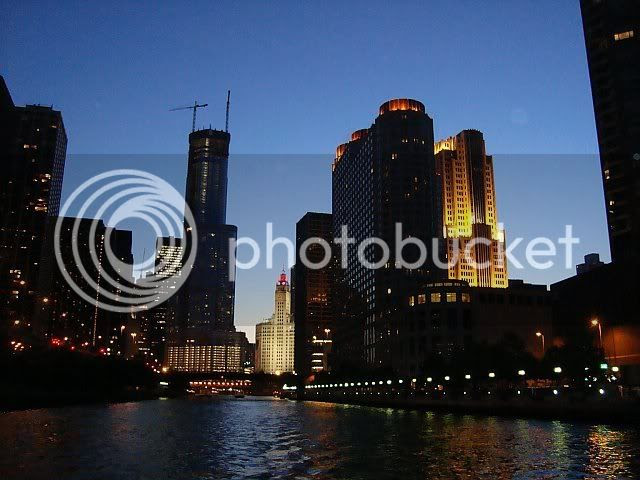 Though I spent the entire weekend drowning in gluttony, swearing to never eat again, my first post back is one of our favorite gluttonous treats: bread pudding. 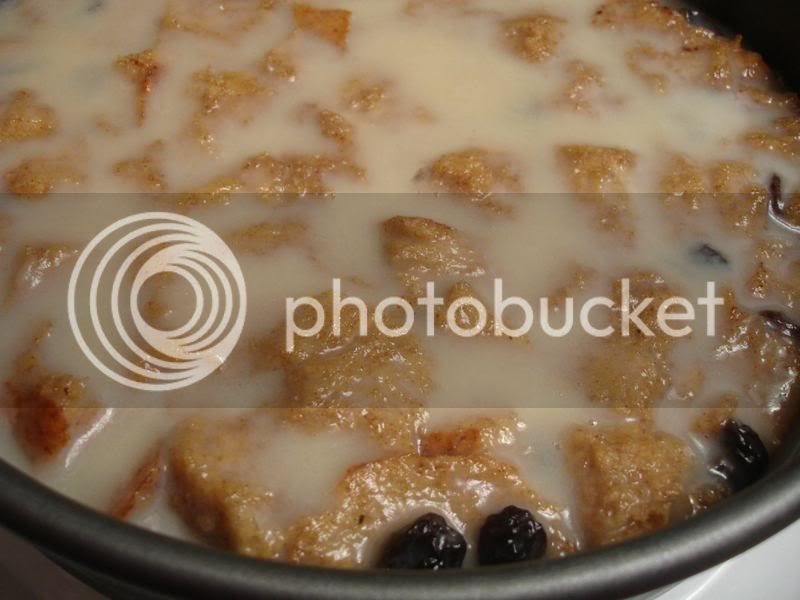 Bread pudding is a strange one. Definitely one of my favorite desserts, but one with such a mediocre name. French Silk Pie… Tiramisu… even Mud Pie conjure up images of deliciously sinful treats. Ones with sexy names.

Bread pudding, on the other hand, sounds like something probably served at the local Hometown Buffet. 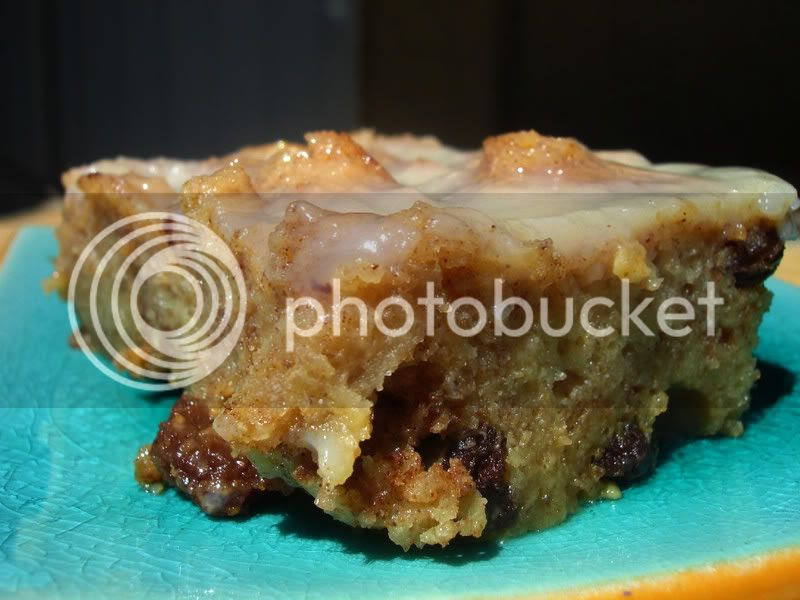 Well, sexy or not bread pudding is amazingly delicious and though it may contain enough calories to last you a week, its worth it. I’ve used this recipe with a variety of breads, usually whatever’s leftover and I’ve had success with all experiments thus far. Cinnamon Raisin bread and whole wheat baguettes have historically turned out the best. Try it with your leftover, stale bread and let me know what you like! Off to go catch up on all the delicious blog posts I've missed out on.....

3. In a small frying pan over medium heat, sauté the raisins with a dash of cinnamon in a tbsp of butter until soft. Toss raisins and chocolate chips with bread cubes.

4. In a small saucepan over medium heat, combine sugars, milk, 1 tbsp cinnamon and butter. Stir until butter is melted. Allow to cool slightly and stir in vanilla. Temper the eggs by adding a few tablespoons of the butter sauce to the eggs. (This step raises the temperature of the eggs to prevent ‘scrambling!’) Add eggs to butter mixture and pour over bread cubes.

Vanilla Bourbon Sauce
6. After replacing the bread pudding in the oven to finish cooking, prepare the Bourbon sauce.

7. Whisk together 3 tbsp milk and cornstarch in a small bowl. Melt butter in a small saucepan over medium heat. Once butter is melted, add Bourbon and sugar and stir constantly until boiling. Slowly add cornstarch mixture to thicken the sauce. Continue cooking until thick, stirring constantly. Remove from heat when thick.

Welcome back!! I'll be in Chicago in August, so it's fun to read that you were just there :0)

Oh. my. goodness. That bread-pudding sounds and looks sinfully decadent (in other words, perfect)!!

Glad you had a great weekend.

Bread pudding is one of my guilty pleasures. I must admit that previous visits to a Hometown Buffet was only made bearable with their mediocre bread pudding. I love yours! Looks like it's worth being guilty about. ;)

Hi, I am new to your blog and I really like your style. This bread pudding looks delicious.

Bread pudding always smells amazing when it is baking, doesn't it?
I always make an amaretto sauce for my panettone bread pudding. i'd rather just eat the sauce ;)

This sounds delightful. I never really liked bread pud until a friend made a whiskey one (on R2S, of course)& now I adore it! This looks great & your trip sounded fun.

That looks soooo good! Is bread pudding something you eat in Chicago? I've always thought of it as a southern/New Orleans thing.

Just stumbled on your blog and it looks fantastic!

I love bread pudding too, there is something magical about the warm and gooey pudding with the spiked bourbon sauce.
I look forward to trying your version.

veggiegirl - thanks! Have a great time in Chicago. It's always so fun there.

noble pig - vanilla bourbon sauce is my downfall. I could mayberesist this otherwise!

eating club - Sometimes buffets are able to pull off good bread pudding, but they look nasty sitting in the warmers!

shreya - thanks for stopping by!

bridgett - I still want to try your panettone bread pudding. I can't even imagine how good it'd be.

recipes2share - how can you resist whiskey? :)

anonymous new york - I eat desserts from all regions :) I think that you're right in that not many restaurants serve bread pudding in the midwest but I think its catching on.

You're right, bread pudding is not seen as glamorous, but sure is good. I like to do cake pudding as weel (with leftover cake), it's so good and sweet!
That one looks great!

I just love bread pudding and used to have my favorite bread pudding from a vendor at the Port Angeles, WA farmers market. Since I moved back home to CA, I miss him and his pudding greatly. Now I'll have to make some on my own with your recipe.
Will ya be sharing some pics of your trip? I love pic's!

I love bread pudding! And your blog :)

Welcome back! I'm glad you had a great time. And I love bread pudding! LOVE it.

Oh Chicago is one of my favorite cities of all!!! And bread Pudding...oh my!

oh that looks so gooey and fabulous! Off to bookmark this to make, very soon.

I've always wanted to visit Chicago, it looks like so much fun!

Your bread pudding looks absolutely delectable! Wish I could dig right in!

sometimes bread pudding turns me off. this is not one of those times. lovely.
glad you had a fun little vacation!

clumbsy cookie - that's an amazing idea! What could be more sinful than cake bread pudding? :)

white on rice - bread pudding from a farmer's market has gotta be delicious. Most of my pics are from our boat trip. I'm not sure my gals would appreciate their swimsuit photos on the web, but I'll be sure to post some pics with clothing :0

katie - thanks so much!!

kristen - let me know how it turns out!

jenny - if you've never been, you should definitely go. SO much good food everywhere.

prudy - if you have a sweet tooth, it definitely is!

This looks absolutely amazing! Ohh, I am beginning to crave some:) This is a must try!

The bread pudding looks yummy. I would love to have a taste! Especially with the vanilla bourbon sauce...I would drink that.

Mmmmm...I have got to try this! Minus the raisins though. :)

This looks so good! I am going to try it for sure! Anything with bourbon is good

I'm not much a bread pudding guy, but that looks so moist and delicious I might just have to give it a try.

That bread pudding looks so moist and good!

I love bread pudding! This one looks really good, especially with that sauce all over! :)

Your bread pudding is loaded with ingredients! Must be delicious.

Never done a bread pudding, but you know what, I have a three day old brioche loaf in there begging for this recipe!

Mmm, bread pudding is my all time favorite. This one looks great.

My elder son is coming home next week from hostel. He is a fan of pudding. I think this would be just perfect him. This sounds so tasty. And would keep me busy in the kitchen, again.